IF I DON'T GET PAID, DOES THAT MAKE ME — PROMISCUOUS? : I Perform an Unsolicited Review of the Danuu WingMan Kayak Fishing Seat Accessory Pack 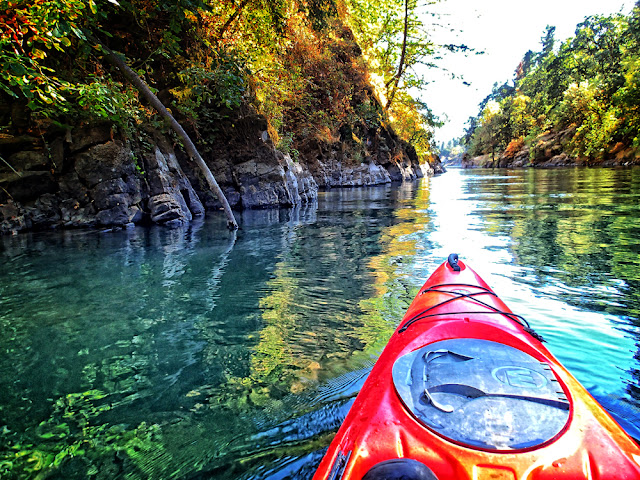 I carefully chose my kayak to be my ultimate photography platform, beer-barge, expedition capable, multi-tasking water-craft, and it has exceeded my expectations. 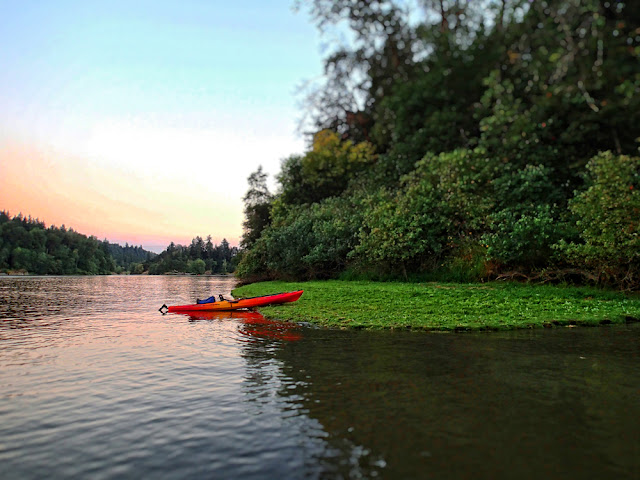 One thing I hadn’t foreseen, however, was my evolution as a fisherperson.  At first, pressured into fishing by my growing awareness of what I’ll term a sort of ‘karmic imbalance’… 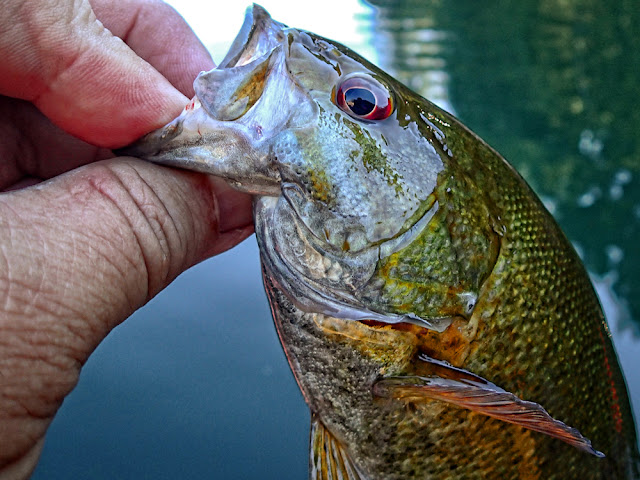 …I soon began to experience brief bouts of not just ‘fishing’, but also ‘catching’, and the catching part turns out to be — really, really fun. 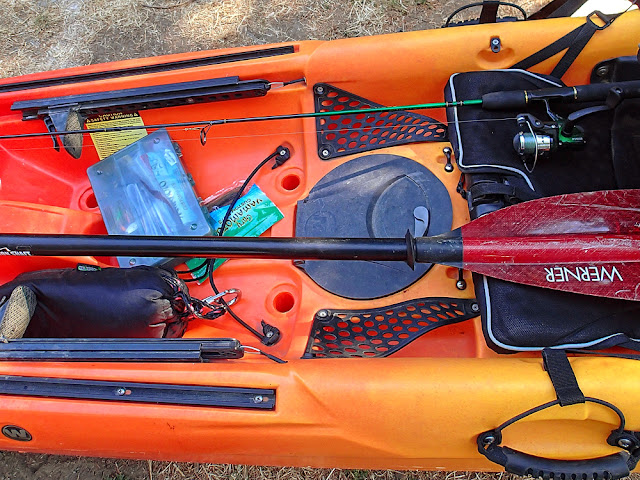 But much like photography, the activity of fishing soon suggests a plethora of accessories and additional tools that need to be juggled in the confines of the kayak cockpit. Obviously, there’s fishing poles and lures and baits and anchors that need to have their places — places where they can be easily and quickly acquired.

The manufacturer of my kayak (Wilderness Systems) is way ahead of me here. They’ve thoughtfully included something they call the SlideTrax Accessory System and of course, a molded cup-holder.  For normal people, these components allow for attaching anything from fishing rod holders to state of the art electronic fish-finders to the point where today’s fishing kayaks begin to rival aircraft carriers in terms of their relative complexity.  But for me, it all turns out to be an elegant way to dump expensive fishing gear into local lakes and rivers (all I did was unloosen a screw — granted a little too much — to adjust the rod-holder’s position, and now it rests at the bottom of Crescent Lake. I can still see that nut, flashing silver, lure- like, as it escaped down the scupper hole.)

Other fisherpeople on a budget have come up with milk crates as a storage solution (with very fine videos available on Youtube showing how to make your own), and while I like the price, I’m concerned about where to put one. 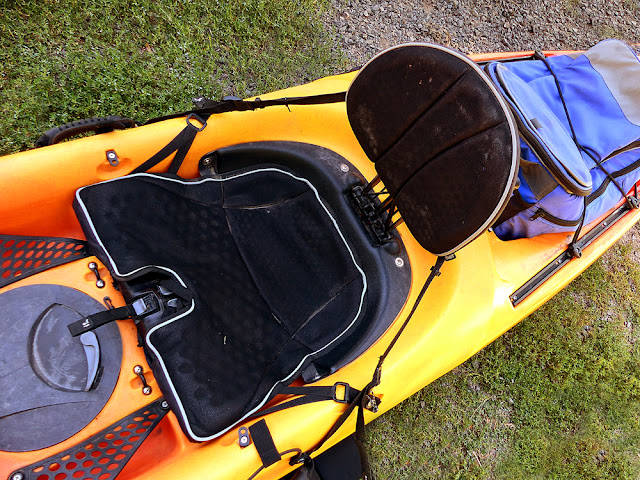 Most fisherpeople seem to put their milk crates right behind the seat, but that spot is reserved for my ice chest, for what I think are obvious reasons.

If only there was something that could fit in that little space between the back of the seat and the ice-chest. 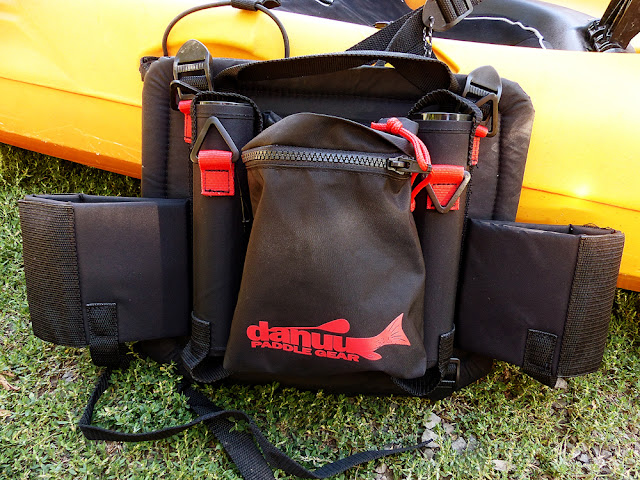 Well, enter the WingMan by danuu Paddle Gear (Editor’s note: to conform to danuu's own logo, our convention will be to spell ‘danuu’ with a lower case ‘d’).

Now those of you who are familiar with the Tarpon 140’s seat know that it is not a metal–frame kayak seat. This didn’t escape me either. So when I stumbled upon the WingMan at Next Adventure Paddle Sports Center (624 SE 7th Ave, Portland OR) I asked a salesperson (who called himself Autzen) if it would be O.K. to try attaching one to a tarponesque seat. Autzen not only said it was O.K., but helped me strap it onto the nearest tarpon.
https://nextadventure.net/danuu-wingman-fishing-accessory-pack.html 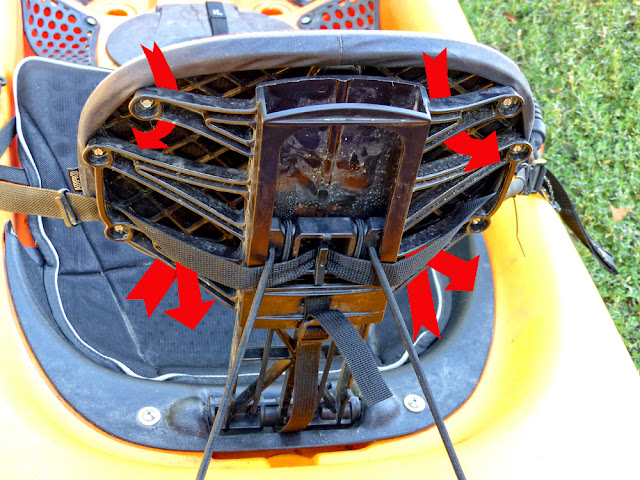 The red arrows show the parts of the seat where I attached the WingMan’s straps, being careful not to interfere with the seat’s own rigging. 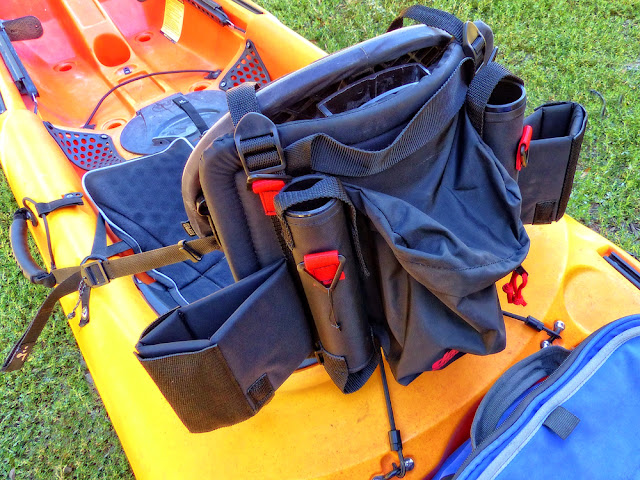 Note: If you like your seat back to ride really low, this accessory may not be for you. As attached here, the accessory pack prevents the seat-back from reaching its lowest position. 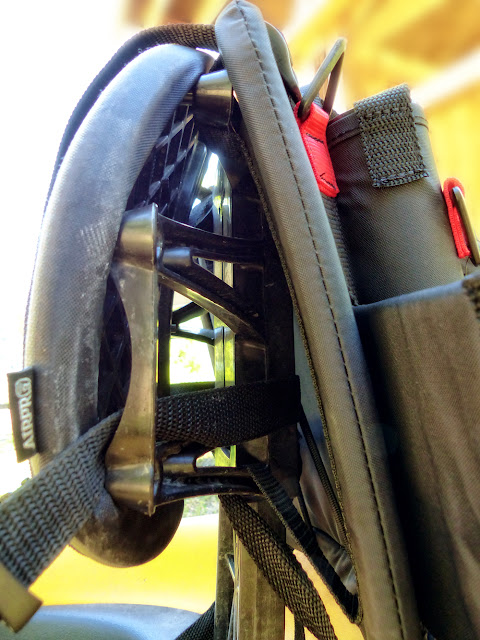 This side view of my kayak seat shows that the WingMan’s vertical length isn’t really an optimal fit for the tarpon’s diminutive seat-back . Notice how far the lower straps have to reach. Never-the-less, as the straps are tightened, the device proves rigid enough to hold firmly. 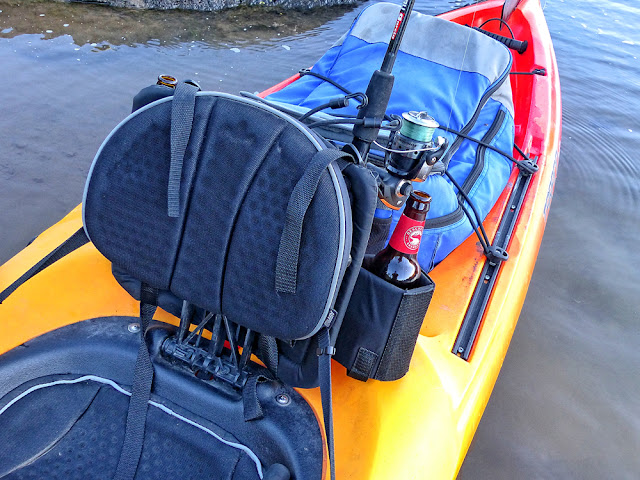 My initial trials reveal that the bottle holders are reasonably placed. You don’t have to be a contortionist to reach them, and inflexible as I am, I could easily reach my beverage without turning around in my seat. The fishing-pole holders were a little bit harder, but with practice, I don’t think I’ll need to turn around to get fishing poles in and out of those either. I can already access the pole on my right-hand side as well as fasten and unfasten the Velcro strap that safeguards the pole while stowed. I really like the placement of the leash lash points. Having them right on the rod holder makes a lot of sense. The leashes will mostly be behind me and out of the way, and I have high hopes that this will eliminate the current fishing-pole-deep-water-migration rate of two per season. 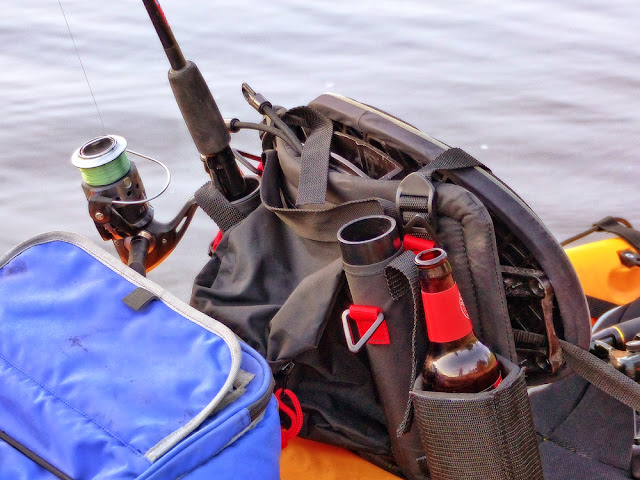 The danuu WingMan isn’t designed for my kayak seat, but still manages to provide me with all of its advertised features.  Initially I was concerned that the minimal anchor points available on my seat-back might result in the pack shifting over time with use, but so far that has not been the case.  While it wouldn’t be difficult to undo the straps and remove the WingMan after using the kayak, I prefer leaving it attached. It has a low profile when empty and folds out of the way with the seat-back during kayak transport.

I think danuu’s kayak fishing seat accessory pack is a good idea and a good product.  I’d be pretty happy if danuu came out with an accessory pack specifically designed for Wilderness System’s Phase three seats, but not as happy as I would have been if I hadn’t already bought one that isn’t. I’m glad I took a chance and decided to give this new storage solution a shot. Hopefully, enough information is presented here to help you make similar decisions for your own kayaks.

Editors’ note:  This essentially has been an exercise in writing a review for an actual real world product. I have not received any compensation, samples, or even minimal political influence for writing this blog entry. But why not ask yourself (if you are a businessperson) if you think you could find a use for high quality images like these and honest reviews for your product(s) — because I know a guy…
accessory danuu danuu WingMan dietz fishing kayak Next Adventure pack paddle photography scott seat sport

Popular posts from this blog 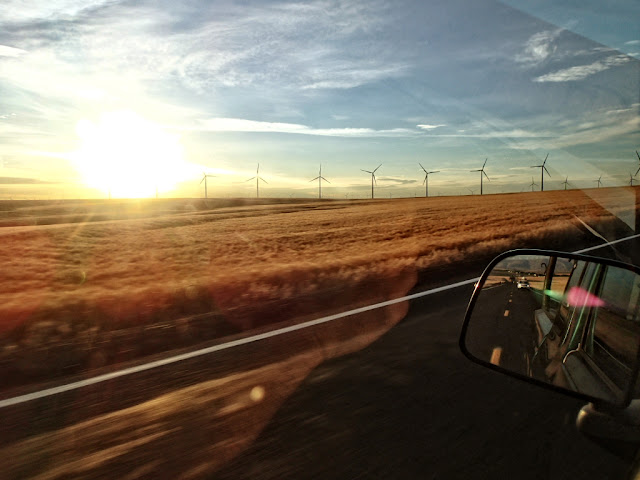 "Ever since the creation of the world his invisible nature, namely, his eternal power and deity, has been clearly perceived in the things that have been made. So they are without excuse;" -Romans 1:20 "I'm not so sure about that, but whether or not we all make it through these rapids alive, I'm confident the grading criteria will be fair." -  Scott "Get ready to explore your world without boundaries." -  Wilderness Systems Owners Manual Sunrise found us on the outskirts of Wasco, high on the Columbia Plateau, our 3 vehicle convoy speeding through golden fields of wheat on toward Condon and then West to a 7:30 AM meeting with a rancher who would provide us a private launch site to the John Day river and also execute our car shuttle.   Startling verdant fields, free of the vestiges of irrigation, belied narratives of drought that punctuated the news. The fresh born morning, still cool to the senses, felt like the fledgling hours of a
Read more 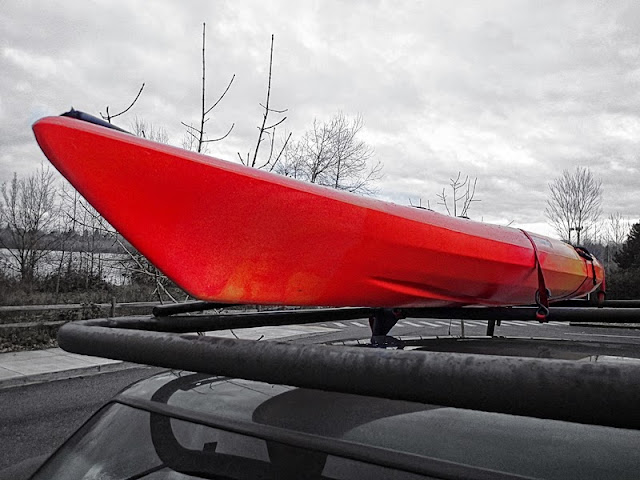 The problem with 'objectivity' is that it's usually 'subjectivity' cleverly disguised as objectivity. I've wanted the Tarpon 160 ever since I saw it sitting in the rack at the kayak shop. However, I'm trying to take the universal advice of the broad community of kayakers who suggest that choosing a kayak is a personal choice based on how a particular boat fits one's body and objectives, and so, going through the motions of due diligence, I've finally come to the day when I actually get to paddle my dream boat. It doesn't escape my attention that I seem to have a Wilderness Systems' bias. The first kayak I ever sat in was their 12 foot plastic Pungo which delivered me down the Sandy River without making me a candidate for the Darwin Awards. The first kayak I ever bought (so far the only kayak I ever bought) was their Tsunami 125 which has, over the last eight years, patiently taught me everything I know about kayaking except for tha
Read more 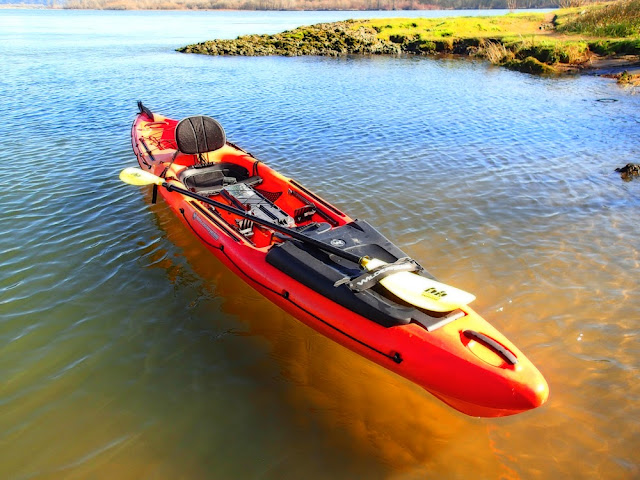 Wilderness Systems has broadened their sit-on-top offerings this year with the introduction of the Thresher (this includes a 14 and 15.5 foot version). The Thresher seems designed to bridge a gap between overly stable, relatively slow fishing platforms and sleeker more touring-orientated craft, all for the sake of fisher-people who need to cover significant distances to reach their intended fishing locales, whether that's in the middle of a huge bay or out beyond the breakers in the open sea The characteristics that make this boat a good fishing option, should also make it a killer expedition photography platform/beer barge. I knew my test trials wouldn't be complete until I auditioned this state of the art bid for kayak fishing supremacy. The Thresher 140 I've probably been remiss for not highlighting this before, but the reason I've been able to rent and evaluate various sit-on-top kayaks is because of the reasonable and renter friendly policies of the
Read more

Scott
Portland, Oregon, United States
I used to be an Art Major, but the (late) owner of the company I work for certified me as a scientist (I asked him to put it in writing – never mind that he signed it with an ‘X’). Back in the olden days when I was trying to be an artist, my instructors criticized my inability to transcend narrative imagery. That explains the name of my photo-blog, The Narrative Image. I don’t know for sure if I’m being stubborn or simply contrarian. Now, I’m an imposter in two worlds - the world of science and the world of touchy feely art things. I ultimately hope to synthesize a personal perspective of the world that incorporates both domains. The Old Testament Creation Narrative suggests that we are made in God’s image. I take that to mean we can sometimes be creative and make or build things. When I take my camera out on the trail I look for some kind of fingerprint or some sense of style that elicits a sense of awe at the eddies along the river of entropy that foster life and complexity.